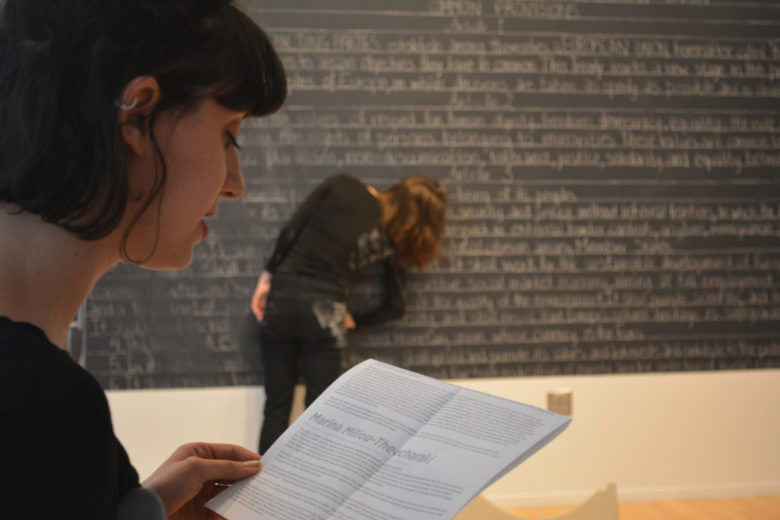 Born in Athens, Greece, Marina Miliou-Theocharaki is an interdisciplinary artist, writer, and dancer. In her practice, definitions of culture and ethnic identity are silently confronted. The spatial and conceptual drift between fictional and socio-politically charged geographies that push her to delicately investigate definitions and compositional arrangements of distance, borders and, non-belonging.  Her work has been exhibited in venues including the Den Theater Chicago; Dfbrl8tr Performance Art Gallery, Chicago; Chicago Home Theater Festival; Woman Made Gallery; Fancy House Gallery, Chicago; the group exhibition Words we Live By, curated by Molar Productions; as well as the Cook County Jail, Chicago. Miliou-Theocharaki was a member of the Chicago-based performance group, Collective Cleaners. They performed in various venues including the MCA Chicago and the Jane Adams Hull-House Museum. Miliou-Theocharaki was awarded the 2015 BFA/Post-Baccalaureate Fellowship from the School of the Art Institute of Chicago as well as the 2014 George Roedern Undergraduate Award in Visual & Critical Studies. She currently holds a position as a Curatorial Research Assistant at the Mary and Leigh Block Museum of Art, Northwestern University, Evanston, IL. Learn more about Marina Miliou-Theocharaki​’s HATCH exhibitions Tracing the Invisible and Being, enough.