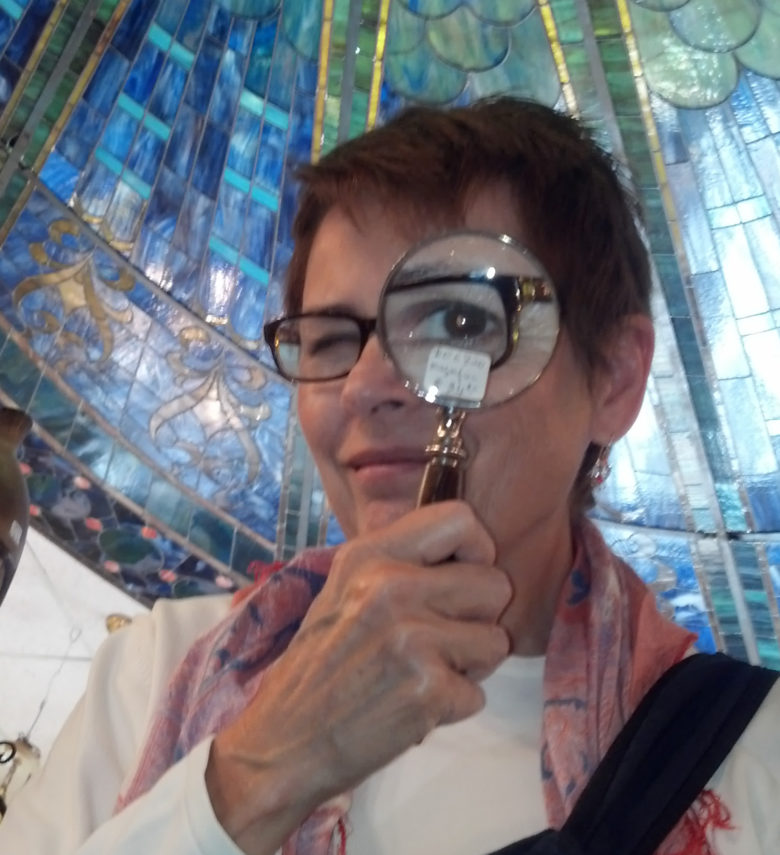 (1950 - 2017) Having worked for years in video and new media, Annette Barbier re-investigated the ways in which embodiment can facilitate the expression of an idea. Barbier called into question our relationship to the natural world using technology as a metaphor for loss. Loss of material through the destructive process of laser engraving, which removes material through burning, as compared to loss of habitat, loss of entire species, and loss of diversity in our native plants and animals.

Barbier received numerous grants from organizations such as the Illinois Arts Council, the Propeller Fund, Faculty Research Grants at Columbia College and Northwestern University, the NEA, and the Fulbright program. She received awards from the University Film and Video Association, the International Digital Media and Arts Association, FILE, Houston Worldfest, the Chicago International Film Festival. Her work has been reviewed in Media-N, the Journal of the New Media Caucus, After Image, the Journal of South Asian Cinema, the New Art Examiner and the Village Voice. Annette Barbier received an MFA from the School of the Art Institute of Chicago.

Image: Annette Barbier, INVASIONS (series in progress), leaves as raw materials for a process of laser cutting text, bar code identifiers, or images of invasive species into examples of native ones. 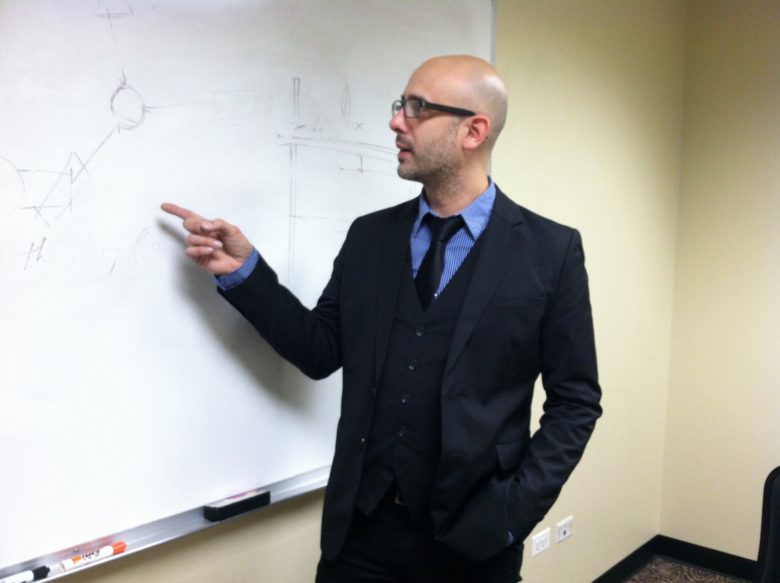 His art has most recently been exhibited at Roger Williams Gallery, Louisville Orchestra Old Forrester Pavilion, Bert Green Fine Art, Kentucky College of Art and Design, Ignition Projects and Chicago Artists Coalition. His art has also been exhibited throughout the United States and Europe, including the Mildred Lane Kemper Art Museum, Laumeier Sculpture Park, the Museum London in Ontario, Canada, and UCLA’s CNSI Gallery in collaboration with Patricia Olynyk.

Ottinger earned his MFA in Studio Arts from Washington University in St. Louis and his BA at Columbia College Chicago in Film/Video Directing.

Erik L. Peterson is a Chicago-based public artist, sculptor, and museum educator. Drawing on the vocabularies of traditional arts media along with architecture and transportation infrastructure, Erik L. Peterson creates site-specific installations, public artworks, urban performances, edible sculptures, and neon artworks that challenge a viewer’s sense of space and self. Teasing out the absurdities of social convention with wry humor, his projects give viewers agency to experience the physical act of perception. Peterson’s unconventional approach to materials and his commitment to audience engagement serve to activate the public realm in new and unexpected ways. His art transports the pedestrian into a space of subtle strangeness and surprise, offering viewers a new way to participate as members of, and in the space within, a complex and changing public.

He holds a B.F.A in Sculpture from Washington University in St. Louis and an M.F.A. from the University of Illinois at Chicago. In addition to his artmaking practice, Peterson is the Manager of Family Programs and Student Engagement at the Smart Museum of Art. Peterson recently completed Ashland, a sculptural bench made from reclaimed ash wood, located in Edgewater Beach as one of the featured artists in the City of Chicago’s Year of Public Art in 2018.  Erik will be a guest speaker for Artist Case Studies: Project Development on December 4, 2018. 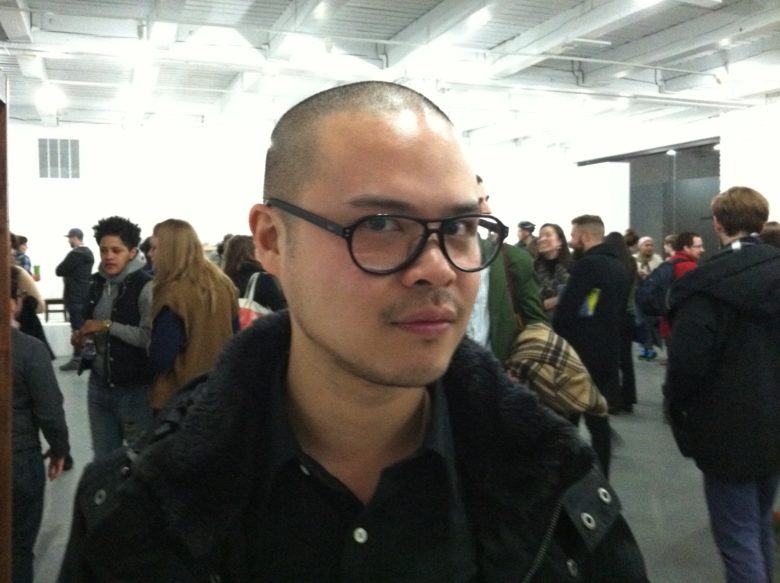 "My practice endeavors to locate the boundless moment in which the diverse material realities of daily life reveal a profound relationship to metaphysical, ineffable and transformative experiences."

Jovencio de la Paz is an Assistant Professor & Head of Fibers at the University of Oregon (College of Design, School of Art & Design, Department of Art) in Eugene, Oregon. De la Paz is also co-founder of Craft Mystery Cult. 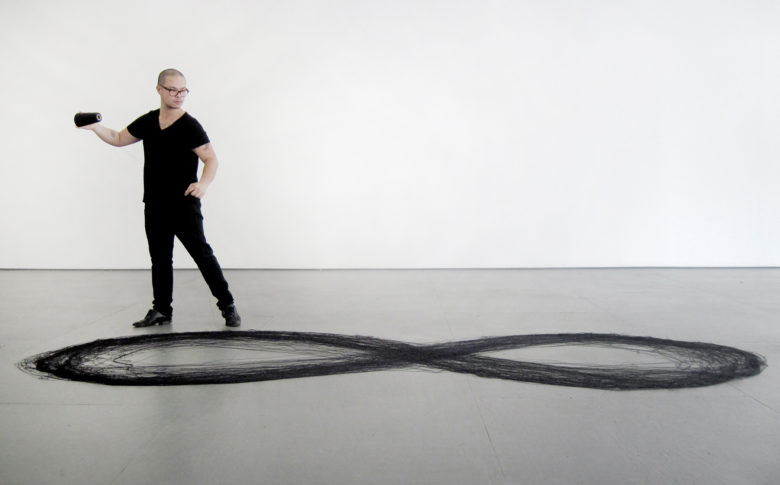 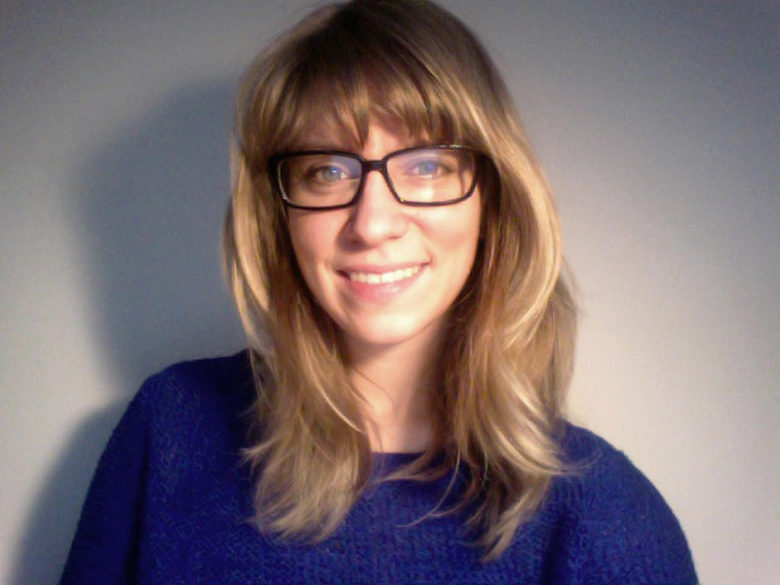 Kim Harty works at the intersection of materials, performance, and technology. Harty’s work examines the alchemical relationship between the artist and raw materials, and exploits the process of transformation inherent in artmaking. Harty creates sculpture, installation and performance through the appropriation and reinterpretation of found objects and their histories. Her work cultivates meaning by forgings relationships between the artist’s body, materials and technologies that leave the viewer with a palpable sensation—one both visual and phenomenological.

Her work has been shown at the Chrysler Museum of Art in Norfolk,  VA; The Corning Museum of Glass, Corning, NY; Gelman Gallery in Providence, RI; Heller Gallery in New York, NY; Sullivan Galleries in Chicago, IL, the Toledo Museum of Art, Toledo,OH.  In 2013 Harty participated in the Pilchuck Emerging Artist Residency at Pilchuck Glass School and the BOLT Residency at the Chicago Artists Coalition.

She is currently the chair for of the Crafts Department at the College for Creative Studies, Detroit MI. Harty received her BFA in glass at the Rhode Island School of Design in 2006, and her MFA in art and technology studies at the School of the Art Institute of Chicago (SAIC) in 2013. 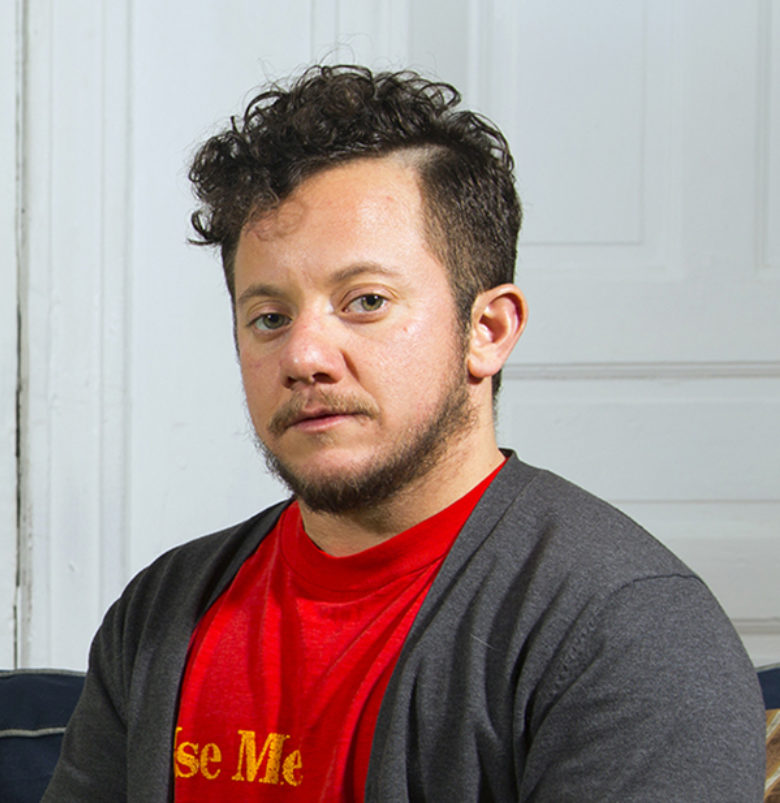 In 2012 Rodriguez curated "The Great Refusal¨ a citywide series of exhibitions and events dealing with queer identities in Chicago. Rodriguez also taught for 6 years (till 2016) at Urban Gateways, a non profit dedicated to providing art education in Chicago Public Schools (CPS) that do not necessarily have resources for such. He has worked within CPS and other art nonprofits for more than fifteen years. 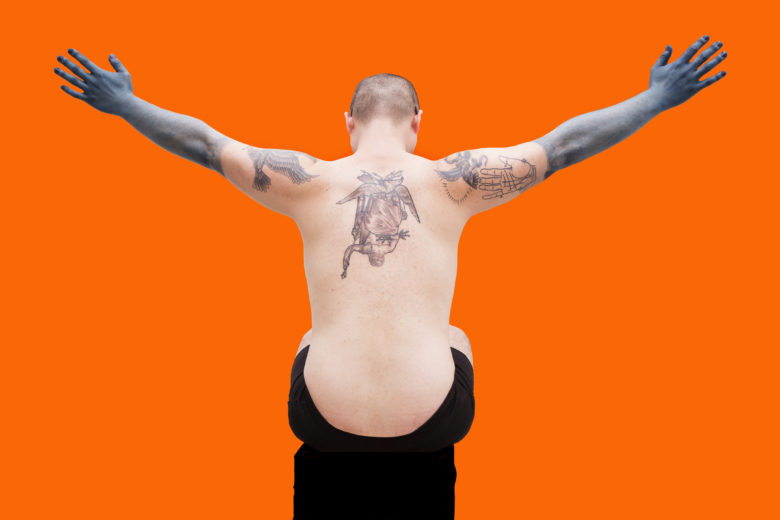 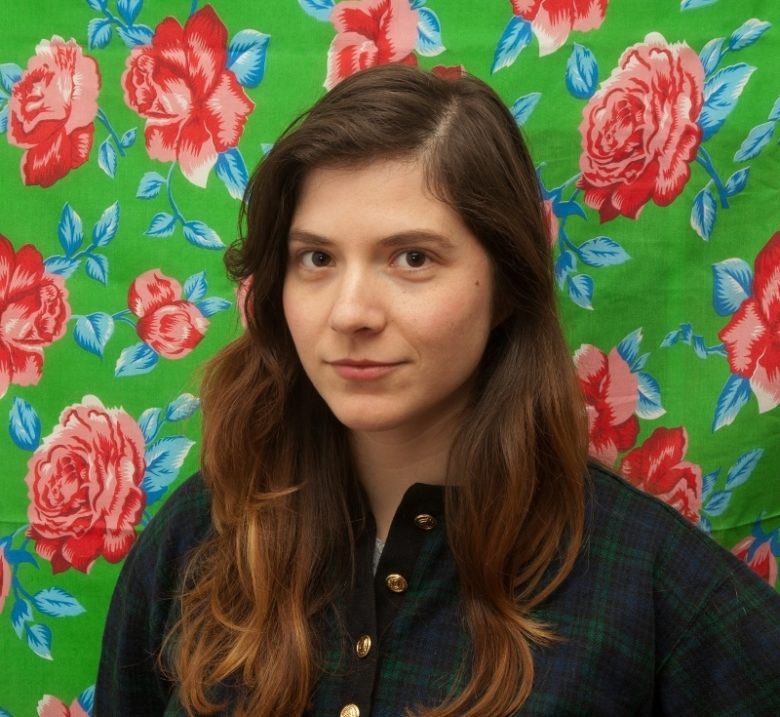 Reut Avisar’s multidisciplinary practice deals with culturally loaded, symbolic artifacts, objects and folk craft as they appear in tourism culture and its different manifestations. Her installations often integrate found objects, ceramics, fabric and hardware in unconventional ways. Her playful and poetic gestures highlight the artifacts she works with as performative means, serving to perpetuate culture and allow for its survival in a utopian form.

Reut Avisar was born in 1985 at Ramat Gan, Israel. Reut earned her BFA in 2011 from Bezalel Academy of Art and Design, Jerusalem and her MFA in 2013 from the School of the Art Institute of Chicago. 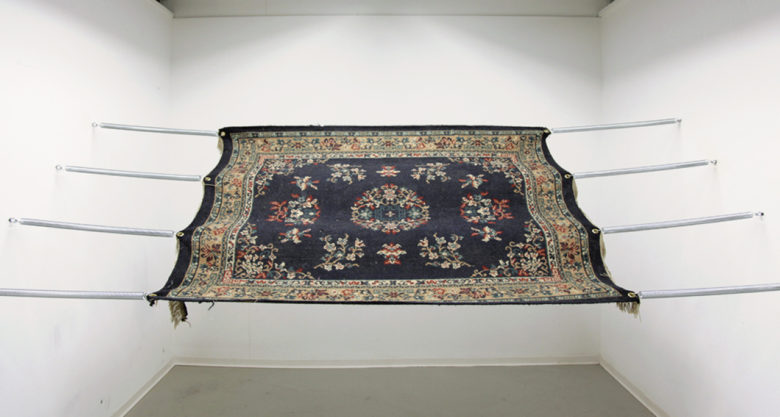 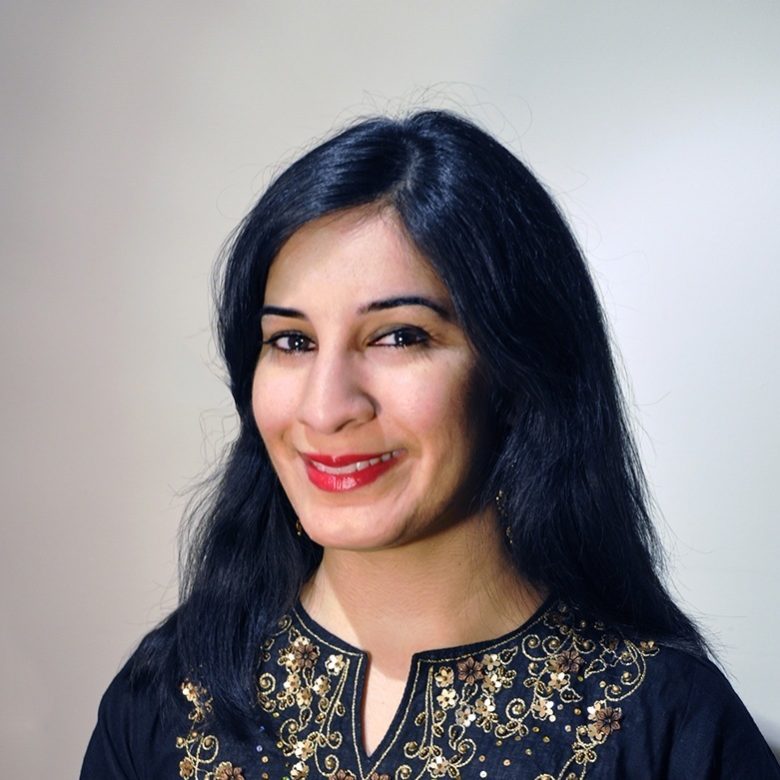 Sabba S. Elahi weaves through records of time --- family photographs, oral histories, and the fractures of personal and institutional memory. Elahi's art is largely impacted by the socio-political issues around Islam, the state of Pakistan, and her proximity and distance as a South Asian American. Her inspiration is drawn from textiles, family photographs, media imagery, the immigration movement, and feminist theory, as she engages in participatory research, dialogues with Muslim women in the U.S., family and friends in the U.S., Middle East, and Pakistan and the larger South Asian American community. As an artist she bares witness to unjust realities, invisible and censored stories.

Sabba Syal Elahi is an interdisciplinary artist and art educator. From 2009-2011 Sabba curated the visual art of Chicago based South Asian artists for an annual exhibition and performance evening, Voices of Resistance.  In summer of 2009, Sabba joined Marwen as Coordinator of College and Career Programs, a position which compliments her psychology and visual arts background and professional experience with youth, families, and communities of color.  Sabba received her M.F.A. from the School of the Art Institute of Chicago, recently participated in a Teaching Artist Residency at Ragdale and exhibited her work through the International Museum of Women.